The visionary pastor and founder of Perfecting Faith Ministries and Perfecting Faith Church, was born in Springfield, Massachusetts. Blessed to travel and live abroad as a child, Pastor Robinson was reared and finished his formal education in Columbia, South Carolina. Blythewood is where he presently lives with his lovely wife, Evangelist Dawana Robinson, a Senior Managing Consultant in the field of Aerospace and Defense Engineering. Dr. and Mrs. Robinson are the proud parents of two beautiful children, Blythe and Hunter.  A proud graduate of the University of South Carolina – Columbia with a dual Bachelor of Arts degree in African-American Studies and Psychology, Pastor Robinson also earned a Masters of Education focus on Community and Occupational Programs in Education from his alma mater. He began his formal doctoral studies in a Ph.D program in Educational Leadership at Northern Illinois University in Dekalb, Illinois, but ultimately heeded the voice of the Lord and returned to the south. After reestablishing himself in the city of Columbia, he attended Lutheran Theological Southern Seminary and ultimately received his Doctor of Education degree (Ed. D) in Curriculum and Instruction and Educational Leadership Policy with an emphasis in Curriculum Studies from the University of South Carolina. His secondary area of concentration focused on Religious Education and Exemplary programs in Education.

For almost 30 years, Pastor Robinson has worked extensively in the field of education. He has served as an Academic Admissions representative and Career Counselor for the University of South Carolina, as well as working in all areas of TRIO Programs. Dr. Robinson also taught high school students with Participation Restrictions, worked privately as an Educational Consultant, and has both taught and counseled on the collegiate level. Additionally he concentrated his instructional efforts on Assessment and Student Success for marginalized students. As an Education Professor, his teaching and research focused on Race, Class, Gender and culturally relevant Pedagogy.  From 2006 to December 2019, Dr. Robinson administrated as the Dean of the School of Honors at Benedict College, which served as a spring board for his current post as the Dean of Academic Affairs and Operations for South University.

Although Pastor Robinson has a strong commitment to education, his first commitment is to God and the work of ministry. With an uncanny gift to preach the Word of God with clarity and uncompromising precision, Pastor Robinson aggressively tackles the tough issues that confront mankind today. Prolific preaching and dynamic teaching of the Word of God have caused Dr. Robinson to be a sought after revivalist and workshop clinician, ministering on such topics as Excellence in Ministry, The Making of a Godly Man, Intercession, The Pursuit of Purpose, and Experiencing God. Anointed with a heavy prophetic mantle, Pastor Robinson has a contemporary flair for “cutting edge” ministry in the 21st century. His visionary mandate is to stir up ministry gifts in the Body of Christ, equipping men and women for Kingdom service and spiritual warfare — thus bringing the people of God into a depth of knowledge and spiritual maturity as to effectuate the culmination of the unfinished task of preparing the Bride of Christ.

Along with the joy that he receives from shepherding the souls that God has entrusted to his care, Elder Robinson has served the Church of God in Christ on the state 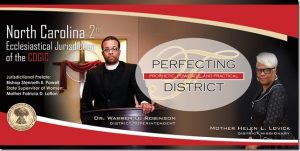 Currently, Dr. Robinson is the District Superintendent of the Perfecting District of the 2nd Ecclesiastical Jurisdiction of North Carolina where Evangelist Helen Lovick is his District Missionary, Mother Patricia David Lofton is His Supervisor of Women, and Bishop Stenneth Emmanuel Powell is his Jurisdictional Prelate. Internationally, Dr. Robinson serves as an Administrative Assistant to Bishop Joe Chase and the Greater Jamaica Jurisdiction of the Church of God in Christ.